Using round numbers, the sun is 100 times as large as the earth. Therefore if the earth is pictured as 1 cm across, the sun would be 1 meter across. The sun is about 800,000 miles across and 93,000,000 miles from earth, so on the scale where the sun is 1 meter across, the earth is 1 cm across and 116 meters away. That is about the length of a football field plus end zones. The distance from the sun to the earth is called an Astronomical Unit (1 AU). Pluto’s average distance from the sun is 40 AUs. 40 x 116 meters is over 4.6 kilometers (nearly 3 miles).

If you want a more manageable model, try modeling the sun as a ball 10 cm (4 inches) across. This model is 1/10 the size of the one we started out with, so it is still large, but it is possible to lay out and visualize the whole thing on the scale of a moderate-sized city park (3/10 of a mile from the sun to Pluto).

To facilitate laying out solar system models of any size, I have created an Excel file that automatically scales the planet sizes in millimeters, and the distances between the planets in “paces.” (You have to tell the program the length of your pace, which you can compute by walking a known distance, then dividing the distance by the number of paces it took you to walk it.) Below is an image of the results for a 4″ sun and a 75 cm pace length. Use these numbers or download the Excel file and generate your own on any scale you want. Put small objects or drawings representing the planets to the correct scale on 3 x 5 cards and use coathanger wire or a small wooden stake to mount each card at the right location. 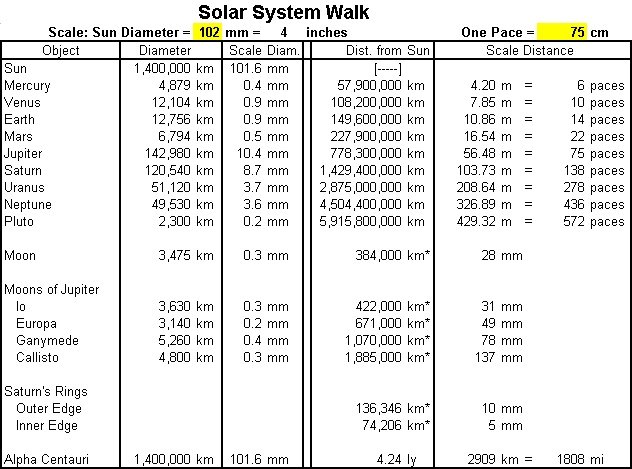 Notice how much space there is between the outer planets. Now imagine the liklihood of collisions between objects this far apart compared to their size. Now consider the fact that Pluto has captured a moon, Uranus has moons that show signs of major collisions, Uranus itself is tilted over on its side due to a huge collision, and Neptune has a moon orbiting backward due to a near-miss collision. For collisions to be likely is such seemingly unlikely circumstances, there must be lots of moon-sized bodies out there. This reasoning has led astronomers to look for more “small” (i.e. asteroid to moon-sized objects) among the outer planets, and they have started to find lots of them. These are called “Transneptunian Objects” or “Kuiper Belt Objects.” Over 800 Transneptunian objects have been found as of early 2004.