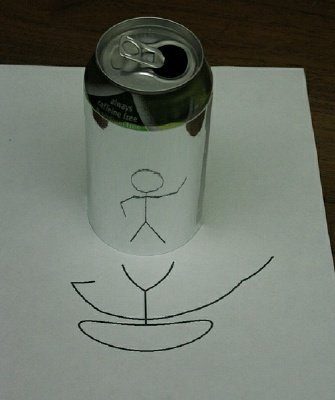 If you look at yourself (or some object or a drawing) in a curved mirror the image will be distorted. But how would you have to distort a drawing so that its image in a curved mirror looks normal? To undo a distortion, you would have to understand the nature of the distortion, which means you would first have to understand the way mirrors reflect light.

Flat mirrors reflect light according to a simple rule: light “bounces off” a mirror at equal angles. If light comes straight into a mirror it goes straight back out. If it comes in at a 45° angle, it reflects back at a 45° angle on the other side. It’s the same rule as for a pool ball making a bank shot. 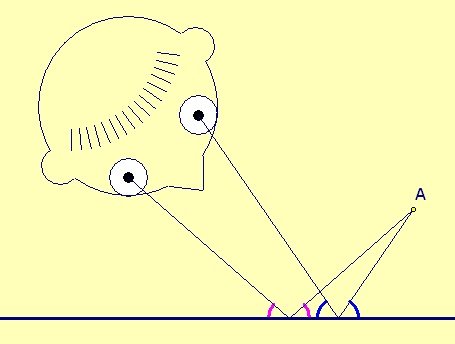 When you look in a mirror you literally look “into” an apparent room behind the mirror. (This is the basis for the story Through the Looking Glass that accompanies Alice in Wonderland.) The reason the image appears behind the mirror is made apparent by the second illustration. 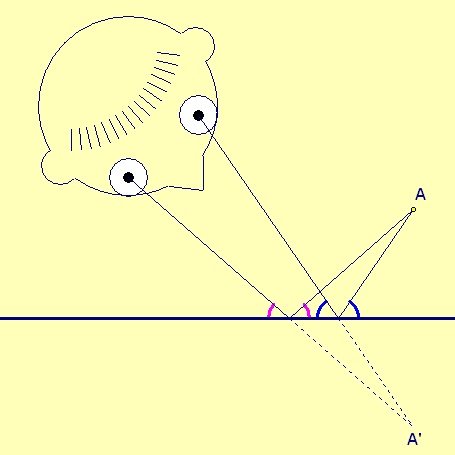 Your eyes locate where things are (or appear to be) by triangulating back to where the light is coming from (or appears to be coming from) based on the direction the light enters your eyes. Your brain assumes the light came in a straight line, so light from an object that has been reflected in a mirror appears to come from a point an equal distance directly behind the mirror. 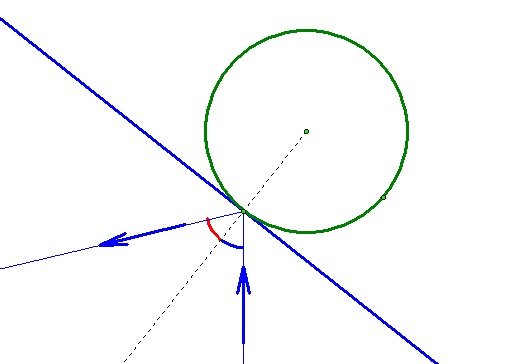 Our cylindrical mirror was made by wrapping a piece of “Chromolux” from Strathmore Decorative Sheet around a soda can.

The construction assumes you are looking at a picture behind a cylindrical mirror along parallel lines of sight. The goal is to transform the picture, point by point, to the region in front of the can. Imagine reversing the light rays and shining a laser at a point on the picture, holding the laser at a downward angle. The laser beam would reflect from the mirror and intersect the plane of the paper the same distance in front of the mirror as if it had continued behind the mirror to the original picture. 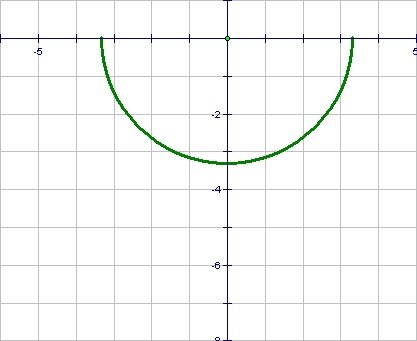 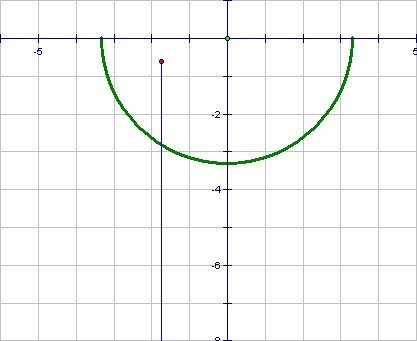 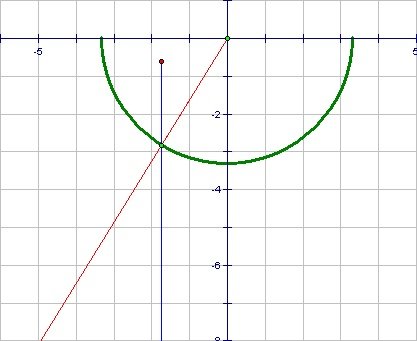 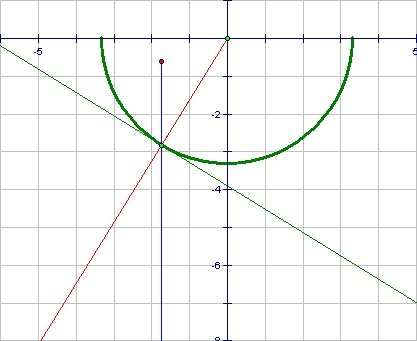 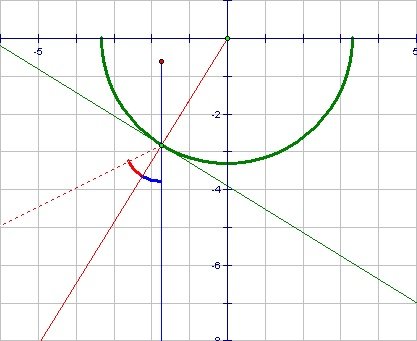 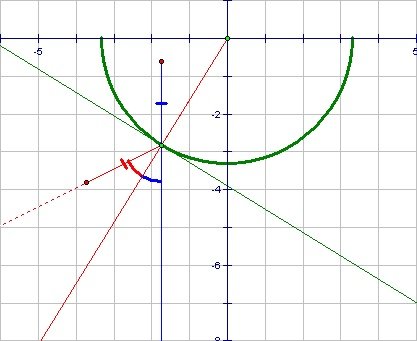 A good first activitiy is to construct a rectangular grid and its transformation. Anything a student can draw in the rectangular grid can be transformed to the distorted grid, square-by-square. Even young students can benefit from recognizing and working with the grid and its corresponding distorted form. (Download the pdf file for this grid. Be sure when you print it out to turn off any “shrink to fit page” settings to assure the printout is at 100% scale.) 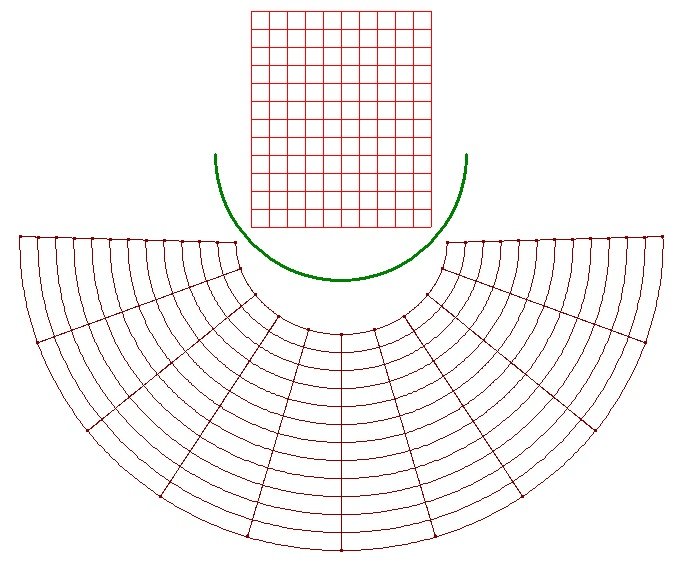 Older students can be taught to construct the transformation with compass and straightedge. Working through it is a good way to teach about the law of reflection as well as the geometry. The Geometer’s Sketchpad can be used to implement the transformation and create transformations of line drawings. (Download GSP file here.) 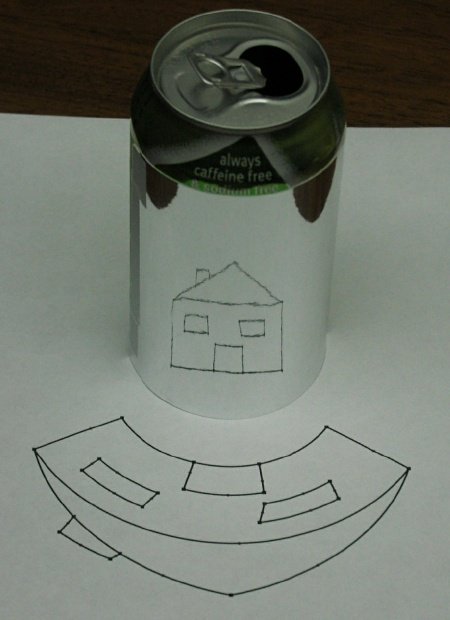 To transform a photograph, one needs to be able to represent the construction in the form of a coordinate geometry algorithm that can be implemented in a computer program. The derivation requires a little vector algebra that would be accessible to Algebra II or Pre-Calculus students (i.e. they should be able to “follow” the derivation, but probably not derive it themselves.) Don’t miss the opportunity to transform pictures of the students themselves! (Download the program used to do this here.)

Whether or not the students work through the derivation, the distorted photos are highly motivating and can hold the interest of students at any level. The fact that they can be seen normally with a cylindrical reflector seems almost magic. 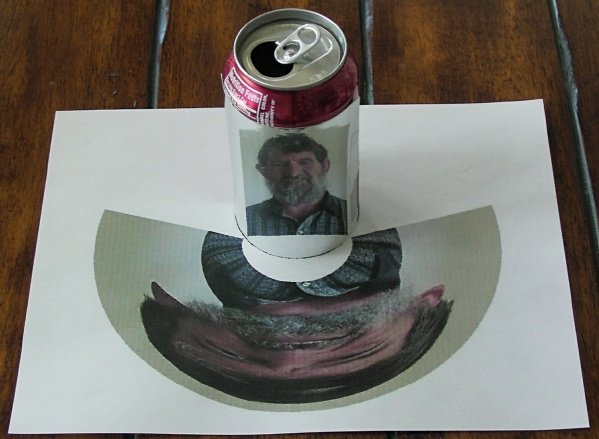